iOS 8.3 landed last week, bringing long-awaited changes, such as wireless CarPlay, the ability to call someone on speaker using Siri and download free apps without the hassle of entering the password, and others. What was great news for consumers wasn’t for some developers: iOS 8.3 also brought security settings changes, breaking the ability of apps such as iFunBox, iTools, iExplorer, iBackupBot, and PhoneView to access the app directories of an iDevice (via MacRumors). 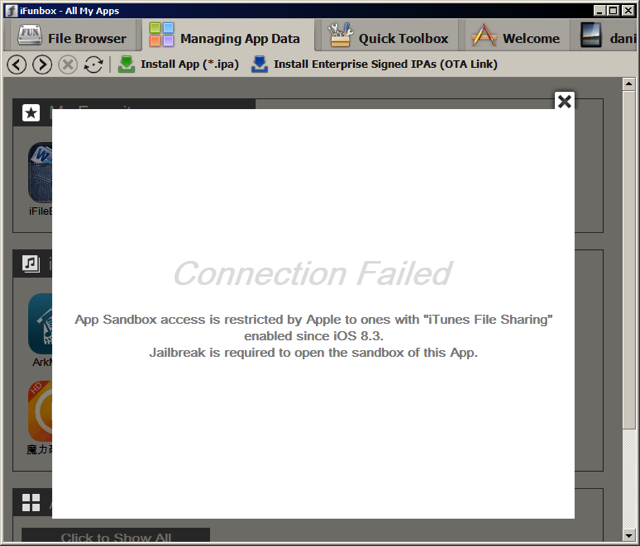 The guys behind iFunBox took up the issue on their Facebook page. In an entry posted on April 10th, they write:

iOS 8.3 ruined our freedom of controlling data in our installed Apps and Games. Apple blocked access of the entire sandbox directory of every installed App since iOS 8.3. Previously only writing is block in executable directory. Now we totally lost the control of Apps on our own devices. We are investigating the situation. Before there is a solution, iFunbox will fail to open data directory of any App if the device is not jailbroken.

It didn’t take long, though, for somebody to come up with a partial fix. iFunBox released an update partially fixing the sandbox access restriction applied by the new iOS 8.3. Now, if you are using the latest version of iFunBox, you can access the apps as you did before. The catch is they need to have iTunes File Sharing enabled, though. To access the rest, you’ll need to jailbreak your iDevice.

iExplorer is currently investigating the security changes Apple implemented in iOS 8.3 and working on a workaround.

These changes affect only those who aren’t willing to jailbreak their iPhone or iPad, but use the aforementioned apps. Jailbreakers can enjoy seamless file transfers as usual, both on Mac and PC.