We’ve told you about the possible changes Apple is planning for iOS 8 with Healthbook, Maps and iTunes Radio. But this is just the tip of the iceberg it seems, at least according to sources speaking with 9to5Mac. The next-generation mobile OS will bring enhancements to pre-installed apps such as Notification Center, Voice Memos, Messages, Game Center, and CarPlay.

As the sources reveal, Apple will simplify Notification Center and will likely remove the “All” and “Missed” tabs to include the “Today” and “Notifications” views. Voice Memos will be redesigned with more visible controls, while Game Center will be removed as a standalone app in iOS and OS X, and will be relocated within games that have already integrated this social gaming service. 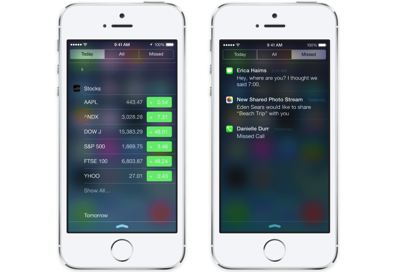 Messages will also be updated with an optional auto-delete function that will allow users to automatically remove older messages (after a well-defined amount of time). This will come in handy for users will limited storage capacity devices.

An interesting addition to iOS 8, according to the source, will be the inter-app communication feature, which will allow apps from the App Store to better communicate and share data.

For example, a future photo editing application could have the ability to push the edited content for upload via the Instagram or Facebook apps. The debut of the API has been in development for the past couple of years, and it had been removed from the launch version of iOS 7 last year for unspecified reasons. With that in mind, it is plausible that Apple could, again, choose to hold back the functionality.

As the Volvo CarPlay announcement has already revealed, iOS 8 is said to include a CarPlay update as well: support for Wi-Fi connections.

Apple is also said to be boosting the performance of iOS 8 compared to iOS 7.

In addition to the in-app tweaks, Apple has been working to speed up iOS 8 in comparison to iOS 7. Applications are said to launch more quickly, close more quickly, and overall system navigation is said to feel much smoother and more stable. Apple sped up animations and improved stability in the recent release of iOS 7.1, but the enhancements in iOS 8 are said to go a bit further.

The next-generation mobile operating system will be unveiled this year at WWDC and will likely go public sometime this fall.