Instead of providing a platform like Health or Passbook, Apple has decided to enhance Siri and allow the iDevice user to control accessories of a smart home by using voice commands.

iOS 8 beta 2 was just pushed out to developers, so we are talking about an operating system in the early stages. And, there are no third-party apps available yet, but Siri is already responding to some HomeKit related commands, as noticed by AppleInsider.

Apple presented a couple of HomeKit features the company will enable when iOS 8 goes public this fall, such as using voice commands to lock the door or turn on the kitchen lights. However, what’s more interesting is how Siri reacts when it is asked about the status of objects in the house, such as “in my door locked?” 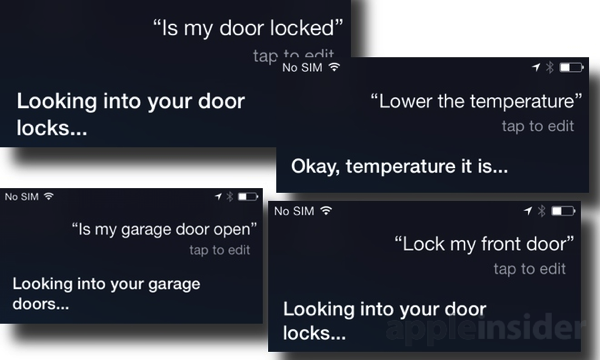 And, as you can see in the above screenshot, Siri reacts by checking the status of the object, but in the lack of third-party apps it simply responds with an error message: “Sorry, I tried but the request failed.”

Although the goal of HomeKit appears to be a unified and simplified control of smart home accessories, Apple has skipped — yet — creating a Health or Passbook-like platform. It may have its reasons, but as the industry grows we may see it happening.

HomeKit will support multiple homes and accessories at a variety of locations. Siri will be able to recognize each room’s individual accessories and control them. HomeKit will launch alongside iOS 8 this fall.