And telling a story well matters even more.

That’s why we’ve created Adobe Voice, a free iPad app that helps you make an animated video — in minutes. You don’t have to stare at a blank page, mess around with bullets and slides or film anything. You just record your voice, select beautiful icons and imagery and it’s all automatically combined with a soundtrack and cinematic-effects.

All you have to do is tell the story. And the app takes care of the rest. 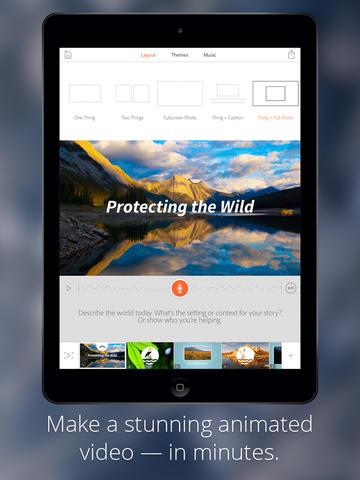 All you have to do is speak into your iPad with your voice to share your story and no filming is involved. There are over 25,000 images to choose from and Voice will automatically throw in cinematic motion and a soundtrack. Check out the promo video below:

Here’s one example of how a volunteer used Adobe Voice:

This almost looks like Adobe’s version of Animoto on your iPad, but with voices.