After looking at the tablet shipment numbers for Q3 2013 published by IDC two weeks ago, Morgan Stanley analyst Katy Hubety has found that, for the first time, Android surpassed Apple both in terms of shipments and, more importantly, revenues (via Fortune). 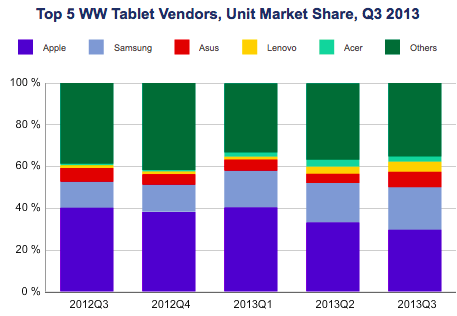 As the IDC report shows, iPad shipments for the September quarter dropped below 30%, which is their lowest level. The market research company emphasized that the drop may be due to Apple’s decision to move its iPad launch to the holiday quarter.

“For the first time,” she wrote in a note to clients Friday, “Android devices accounted for a greater share of the market in revenue terms than iOS. Android revenue share reached 46.2% in 3Q13, for the first time exceeding iPad share of 45.6%. Android’s unit share grew to 66.7% from 58.5% a year ago, largely driven by Samsung and Lenovo, while iPad share declined to 29.7% from 40.2%.”

One thing has to be noted here, though: IDC provides shipment estimates (how they get these numbers is a mystery), which is not necessarily equal to sales, and the Katy Huberty note to investors doesn’t share the method through which she got the revenue-share numbers.

However, looking at the sales of the iPad Air and Retina iPad mini, the analyst believes Apple will have a great holiday quarter.