During Apple’s 2012 Q4 earnings call, Apple CEO was asked a question about the company’s old position on dismissing 7-inch tablets made by their competitors, which the late Steve Jobs said would “dead on arrival”. Cook clarified that stance was aimed directly at precise tablets of 7-inches in diameter–whereas the new iPad mini is at 7.9 inches and a screent ratio of 3:2 which provides 35% more screen area (via the WSJ):

Q: Why launch the iPad now? Was the time right?

Cook: On your question about iPad Mini, the comments you’re referencing are comments Steve had made before about 7-inch tablets. Let me be clear, we would not make a 7-inch tablet, we don’t think they’re good products. One of the reasons is size. The difference on just the real estate size is almost 30%. When you look at the usable area, it’s much greater than that, it’s 50-67%. The iPad Mini has the same number of pixels as iPad 2 does, so you have access to all 275,000 apps that are in our App Store that have been custom designed to take advantage of the full canvas. iPad Mini is a fantastic product, it’s not a compromised product like the 7-inch tablets.

That 35 percent Cook is referencing has been part of Apple’s marketing strategy as a plan of attack against 7 inch rival tablets like the Google Nexus 7 and Amazon Fire HD. 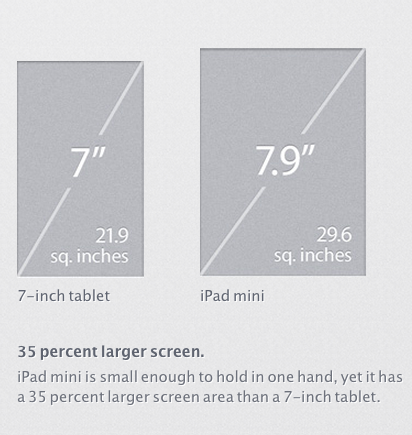 “These are among the reasons that the current crop of 7-inch tablets are going to be DOA — dead on arrival,”

Jobs also noted competing manufacturers were struggling to meet the pricepoint of the iPad at the time. Since then, we’ve seen the demise of the HP TouchPad and BlackBerry PlayBook. This afternoon, Amazon announced a quarterly loss of $274 million dollars. The company admits it sells its Kindle Fire line up at a break even price (or even a partial loss) and would rather make money by having customers consume their content.