Apple posted its first drop in iPad sales since its launch but still remained the No. 1 tablet manufacturer, according to the latest data released by Canalys. Although Apple posted incredible Q2 results, analysts were eager to point to Apple’s failure in meeting iPad sales expectations. The market research company, however, comes to calm the spirits and points to a global decline of 21% in tablet shipments as channel stock rises, they say.

On a global scale, tablets accounted for 41% of the PC market, notebooks 38% and desktops 21%.

The Cupertino company has lost market share during the past quarter, dropping by 3% to 17% on a global scale. Its US iPad shipments fell by 40%, the market research company says, with the drop offset by a 20% growth in China, the company’s second largest market. iPad shipments accounted for 80% of Apple’s total PC shipments. 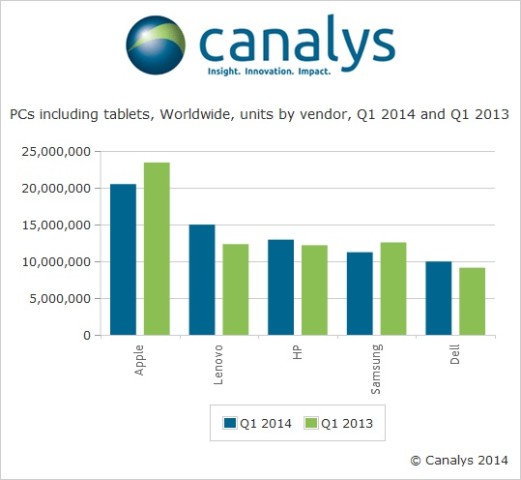 ‘The fall in iPad shipments in Q1 was the sharpest ever,’ said Canalys Senior Analyst Tim Coulling. ‘Apple took action during the quarter to run down its iPad inventory, a smart move as tablet stock in the channel rose due to strong seasonal shipments in the previous quarter. Longer term, we do not believe Apple’s Q1 performance points to a decline in the tablet category, despite growing pressure from larger-screen smart phones. Consumers, and increasingly businesses, are continuing to adapt, with tablets acting as disruptors and finding their place as desktop and notebook replacements. Apple’s ecosystem and the recent launch of Office for iPad should ensure it is well placed to remain a leader for some time.’

On the other hand, Lenovo had a great quarter, Canalys reports, as it grew by 2% to a 12% global market share with 15 million units shipped, ranking second.

Samsung dropped to fourth place as its PC shipments fell, and HP quickly jumped to third place as its 12.9 million units shipped secured 11% of the global market. It is worth mentioning, however, that of those units, fewer than 400,000 were tablets.