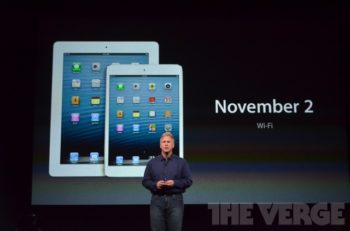 “The iPad is far and away the most successful product in its category. The most affordable product we’ve made so far was $399 and people were choosing that over those devices,” Schiller said.

“And now you can get a device that’s even more affordable at $329 in this great new form, and I think a lot of customers are going to be very excited about that,” Schiller said.

“Others have tried to make tablets smaller than the iPad and they’ve failed miserably,” Schiller said during the event. “These are not great experiences.”

Price expectations were set by rumours that the iPad mini would range from $200-$250, a pricepoint to enable Apple to obliterate its 7-inch tablet competition from Google and Amazon. However, those companies are selling their hardware either at cost or a loss, and that price war is something Apple would never want to compete with. Apple knows the iPad is already a huge success with over 100 million sold and the iPad mini is an extension of the popular product’s next place in history.

The iPad mini has a much more robust ecosystem of apps and integration with existing apps since no major modifications are needed. Sectors in education and healthcare are going to continue to jump on the lower-priced iPad mini as they already know what it’s capable of based on their experience with the original iPad form factor. Only this time, it’s even more portable and–‘cheaper’.

The iPad mini will most likely sell out of its online pre-orders this Friday given the aggressive worldwide launch by Apple to conquer the holiday season.