IDC’s latest estimates of worldwide tablet shipments for the fourth quarter of 2013 are out and it seems that Apple has continued to extend its lead, growing its tablet market share to 33.8% from 29.7% in the previous quarter (via MacRumors). It is believed that the holiday quarter with refreshed iPads (iPad Air and iPad Mini with Retina Display) allowed Apple to grow its market share, which currently stands at almost one-third of all tablet shipments worldwide.

According to IDC, Apple shipped 26 million iPad units during the quarter, up from 14.1 million the previous quarter and 22.9 million in Q4 2012. The source however highlights that even though the quarter represented the company’s most successful on record, its year-over-year growth of 13.5% was well below the industry average. Samsung on the other hand showed its year-over-year growth of 85.9% for the same period, coming in at second place ahead of Amazon, Asus and Lenovo.

“The numbers bring into focus the challenges the company faces as it attempts to grow its tablet business in markets outside of its traditional mature-market strongholds and in the face of continued success from competitors both large and small. 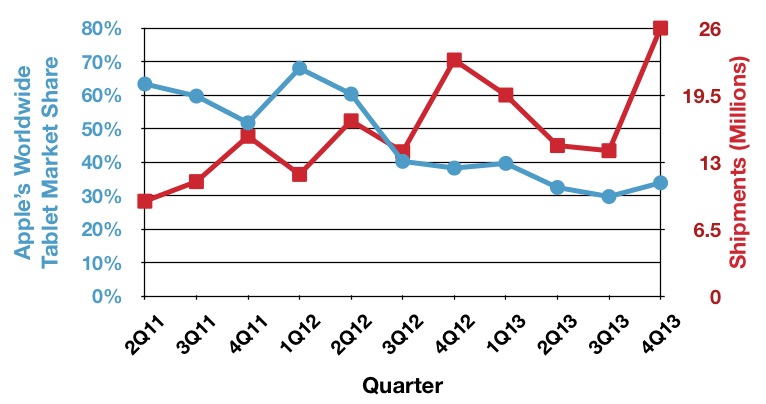