According to a new report by PadNews (via UnwiredView), both 2K panels as well as 4K panels are currently being considered by Apple for a larger 12.9” iPad a.k.a iPad Pro / iPad Maxi. As always, it is not necessary that such a product will eventually hit the market, but the source claims that Apple is surely testing “something this big”. 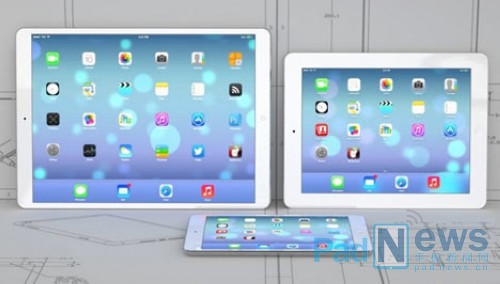 The source goes on to claim that this bigger iPad could be launched as early as April next year. However, it may just get a 2,048×1,536 screen upon initial launch. An updated version of the alleged device with a 4K display should follow around October of 2014.

“Because these monikers are being thrown around for a multitude of different resolutions, it’s impossible to say which Apple will choose. By some definitions, the 2,048×1,536 resolution already employed by Apple in its latest full size iPads could be “2K” itself.

It must be kept it mind that the report is merely a rumour for now, and we’ll be sure to update you if it develops any further.