For the first time since the tablet market was born – in 2010 with the launch of the iPad – worldwide shipments have stopped growing, according to the latest data from International Data Corporation (IDC) Worldwide Quarterly Tablet Tracker. Overall shipments for tablets hardly reached 76.1 million in the holiday quarter, recording a 3.2% drop, the market research company reported today.

However, if we look back at the full year, shipments are up 4.4% to 229.6 million units, with Apple and Samsung manufacturing most of the tablets shipped.

“The tablet market is still very top heavy in the sense that it relies mostly on Apple and Samsung to carry the market forward each year,” said Jitesh Ubrani, Senior Research Analyst, Worldwide Quarterly Tablet Tracker. “Although Apple expanded its iPad lineup by keeping around older models and offering a lower entry price point of $249, it still wasn’t enough to spur iPad sales given the excitement around the launch of the new iPhones. Meanwhile, Samsung’s struggles continued as low-cost vendors are quickly proving that mid- to high-priced Android tablets simply aren’t cut out for today’s tablet market.” 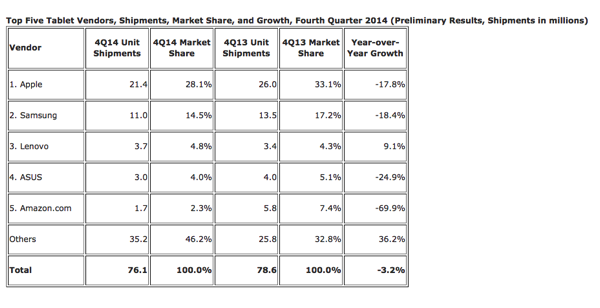 You may recall that Apple sold 21.4 million iPads during the past quarter. Despite its “low” iPad sales, Apple managed to keep its #1 position, as Samsung managed to ship only 11 million units during the same period, according to IDC’s data. Lenovo comes in a distant third, with only 3.7 million units, although it is the only manufacturer of the top five reporting growth in this market segment.