Best Buy Launches iPad Air Sale for Back to School: $100 Off All Models

If you’re looking to buy an iPad Air, Best Buy has launched a sale right now for back-to-school, slashing $100 off all models, both Wi-Fi and cellular versions. 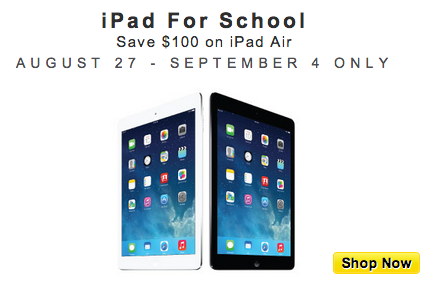 The entry 16GB Wi-Fi iPad Air is now available for $419.99, which is cheaper than Apple’s own Back to School promo. The discount has been applied to all 16 model configurations available from Best Buy, with availability both online and in-store.

The sale goes from August 27 to September 4. Apple most likely will announce refreshed versions of the iPad this fall, but if you’re looking to get one now, this seems to be the best deal out there.

Apple’s Stage Manager multitasking feature in iPadOS 16 is only for tablets with the company’s M1 chip, but that is now changing. According to Engadget, Apple told the publication Stage Manager is now expanding to older iPad Pro 3rd gen and 4th gen models when iPadOS 16 is released later this year. M1 iPad Pro […]
Gary Ng
3 hours ago