If you’re looking to grab the iPad Air, check out your local Best Buy Canada location and online as there seems to be a one-day sale on Apple’s latest full-sized iPad. The savings range from $20-$30, depending on the Wi-Fi or LTE model.

These savings bring the Canadian prices down a bit to make them on par with our American counterparts, in particular the 16GB Wi-Fi model at $499. 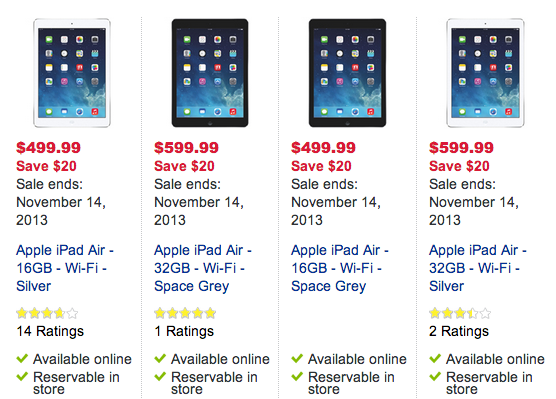 There are also savings on the original iPad mini: $30 off which makes it $289.99 for the 16GB model, one of the cheapest prices we’ve seen.

The iPad Air sale ends today, so act quickly if you want to save a few bucks, but the other iPads are on until November 18 (iPad 4) and November 21 (iPad mini).

You can also price match these offers at Future Shop or any other store. Good luck.

Apple’s Stage Manager multitasking feature in iPadOS 16 is only for tablets with the company’s M1 chip, but that is now changing. According to Engadget, Apple told the publication Stage Manager is now expanding to older iPad Pro 3rd gen and 4th gen models when iPadOS 16 is released later this year. M1 iPad Pro […]
Gary Ng
18 hours ago