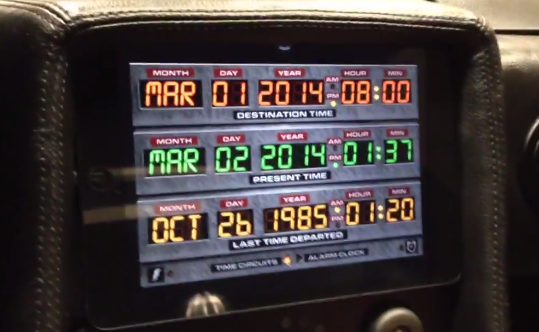 With all the talk about Apple’s CarPlay integration, the following is modification to a 1981 DeLorean that is just too cool. YouTuber DMCPat has shared videos of custom mods to his Back to the Future ride which includes a custom in-dash iPad mini which acts as a full entertainment system and more.

When the key is turned his iPad mini turns on and can be controlled with a remote and of course the tablet’s on-screen display. One app that he uses is Speed Tracker which shows his car’s speed and GPS location, making for a pretty cool dash experience.

The integration of an iPad mini coupled with the Google Search iOS app and its Google Now voice integration shows how he can easily search without typing (users can also start searches by saying “OK Google”) and get directions with Google Maps.

Last but not least, there’s a flux capacitor app which can take his car back in time or into the future. This is a slick integration of an iPad mini into this classic DeLorean.

Check out the videos below and tell us what you think!

Below is how he has integrated Bluetooth to allow him to make calls using Siri and more: