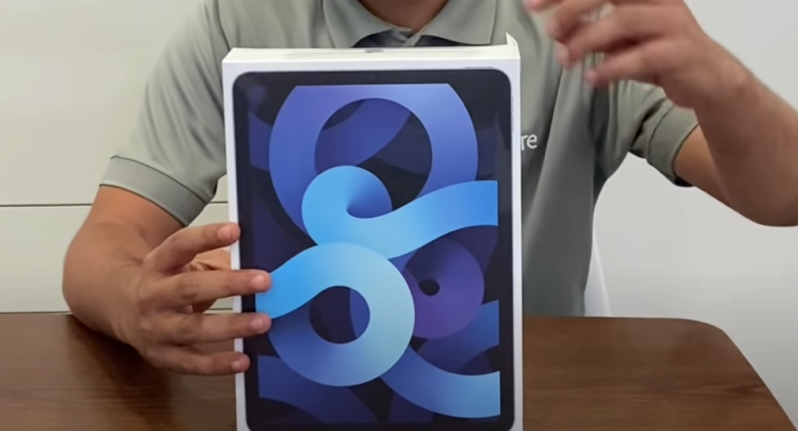 While today Apple unleashed its torrent of iPhone 12 and iPhone 12 Pro reviews and unboxing videos, tomorrow should see the embargo lift on the new 2020 iPad Air reviews as well, according to Jon Prosser.

But before Wednesday’s embargo, a YouTube channel by the name of Tech107 has shared an iPad Air unboxing video of the new tablet in Sky Blue.

The unboxing video is just over one minute in length and appears to show a genuine iPad Air being unboxed, showing the plastic screen protector film (unlike paper used in this year’s iPhone 12 and iPhone 12 Pro), plus the 20W USB-C power adapter.

Based on the Type C adapter prongs shown in the video, Tech107 appears to be based in Europe, and could be an Apple reseller that unboxed an iPad Air early.

The video gives us a good look at the new flat edge design of the iPad Air, which takes design cues from the iPad Pro, while also showing us the new Touch ID power button for the first time.

Apple’s iPad Air launches on Friday, October 23 and is priced from $779 on Apple.ca.