Black Friday was a hit. Well, at least for some companies (Apple), while Microsoft just cannot make this claim. Turns out its recently launched and pushed-with-‘click’-ads Surface tablet just isn’t what consumers really want. 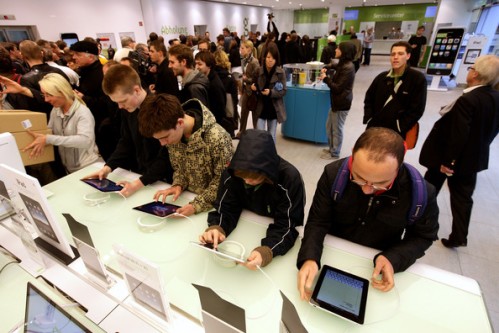 Fortune has already posted a short video comparing a Microsoft Store and an Apple Store on Saturday, which had already suggested exactly what Gene Munster of Piper Jaffray put down into numbers this morning.

According to Philip Elmer-Dewitt, Gene Munter’s crew spent eight tough hours on Black Friday — just like they usually do on Black Friday — counting the people stepping into Apple’s Minneapolis Store located in the Mall of America, and another two hours monitoring the Microsoft Store across the hall.

In addition, the iPad was the most popular Apple item buyers sought to purchase. To put it into numbers, the Gene Munster study shows Apple sold 11 iPads per hour, while Microsoft sold zero Surface tablets. This is bad news for Microsoft.