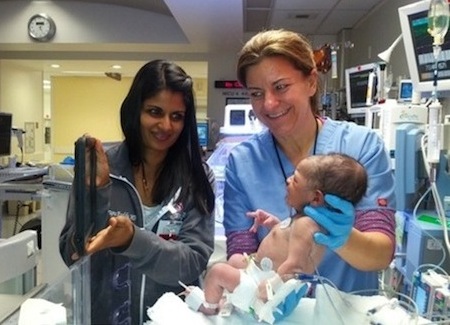 TUAW is reporting that Cedars-Sinai Medical Center in Los Angeles has deployed iPads in its neonatal intensive care unit (NICU) in order to help mothers stay in touch with their newborns and also interact with hospital staff when they are unable to do so in person. The initiative is a part of a program called BabyTime, which is aimed at helping bridge communication with the family and the baby’s medical team.

When a newborn is admitted into the NICU, one iPad is placed next to the baby’s incubator while another is delivered to the baby’s mother. The press release notes that the mother can log onto BabyTime twice a day. When doctors and nurses are treating a newborn in the NICU, moms can ask questions and get updates, even if they are on a different floor.

Cedars-Sinai notes that approximately 20 to 30 percent of new mothers who undergo C-sections “do not feel well enough to travel from their bed in the Labor and Delivery unit to the NICU for the first 24 to 48 hours.”

With the iPad, however, these mothers can now see their newborn and, just as importantly, interact with the nurses and doctors keeping an eye on their baby.

All in all, it’s a great way to keep patients more involved and informed while also adding an overall sense of comfort to what can otherwise be a stressful and worrisome situation.

Recently, the same hospital has also handed its staff iPhones to facilitate communication amongst nurses and doctors.