The demand for tablets seems to have no intention of slowing down, but the market leader, Apple, appears to losing ground as market competitors gain traction, according to the International Data Corporation’s preliminary estimates of worldwide tablet shipments. Its market share dropped below 40% to 39.6% in the first quarter, from 43.6% reported for the holiday quarter. Apple lost 18.6% of its market share in just a year, when it held 58.2% of the market in Q1 of 2012. 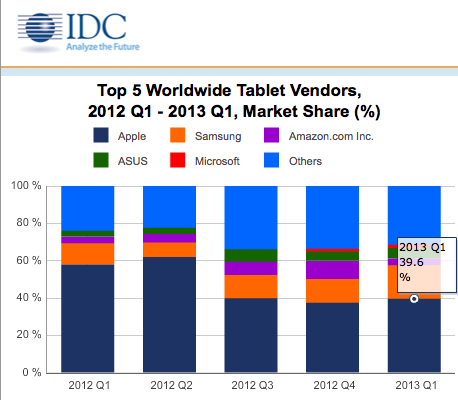 Apple did surprise Wall Street and market analysts, beating even IDC’s recent projections for the first calendar quarter of 2013, by shipping 19.5 million iPads compared to the forecasted 18.7 million units.

The company, which historically has experienced a steep drop off in first quarter shipments (following strong holiday sales in the fourth quarter), saw some smoothing of that seasonality this year.

“Sustained demand for the iPad mini and increasingly strong commercial shipments led to a better-than expected first quarter for Apple,” said Tom Mainelli, Research Director, Tablets at IDC. “In addition, by moving the iPad launch to the fourth quarter of 2012, Apple seems to have avoided the typical first-quarter slowdown that traditionally occurred when consumers held off buying in January and February in anticipation of a new product launch in March.” 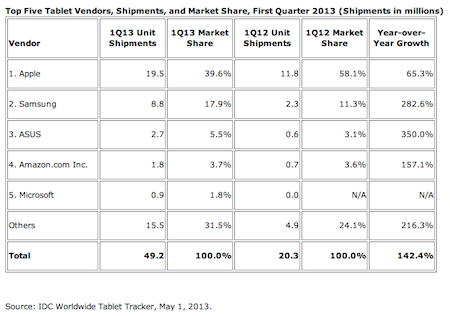