Analysts have expressed their concern after Apple reported declining iPad sales for the second consecutive quarter. Between April and June, Apple sold 13.3 million iPads of the 49.3 million units tracked by the International Data Corporation (IDC) Worldwide Quarterly Tablet Tracker, maintaining its lead in the tablet market, and this, in a quarter when the worldwide tablet market grew 11%, year-over-year.

“As we indicated last quarter, the market is still being impacted by the rise of large-screen smartphones and longer than anticipated ownership cycles,” said Jean Philippe Bouchard, IDC Research Director for Tablets. “We can also attribute the market deceleration to slow commercial adoption of tablets. Despite this trend, we believe that stronger commercial demand for tablets in the second half of 2014 will help the market grow and that we will see more enterprise-specific offerings, as illustrated by the Apple and IBM partnership, come to market.” 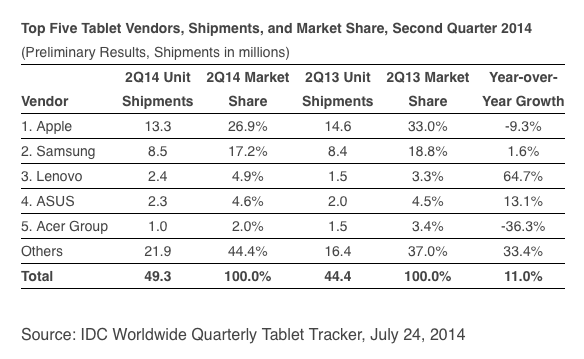 iPad sales accounted for 26.9% of all tablet shipments, according to the IDC’s data, down 9.3% year-over-year. Samsung ranked second, with a market share falling from 18.8% recorded for the same period a year ago, to 17.2% in the second quarter of 2014. The South Korean manufacturer shipped 8.5 million Android tablets.