International Data Corporation’s (IDC) recent tablet shipment forecast paints a bright future for tablets, with nearly 60% growth estimated on a year-to-year basis. Sales are predicted to reach an amazing 229.3 million units. The growth comes at the expense of the portable PC market, which is expected to see negative growth for the second consecutive year. 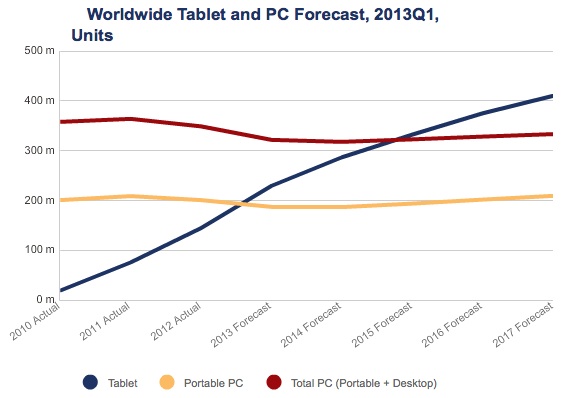 “What started as a sign of tough economic times has quickly shifted to a change in the global computing paradigm with mobile being the primary benefactor,” said Ryan Reith, Program Manager for IDC’s Mobility Trackers. “Tablets surpassing portables in 2013, and total PCs in 2015, marks a significant change in consumer attitudes about compute devices and the applications and ecosystems that power them. IDC continues to believe that PCs will have an important role in this new era of computing, especially among business users. But for many consumers, a tablet is a simple and elegant solution for core use cases that were previously addressed by the PC.”

“Apple’s success in the education market has proven that tablets can be used as more than just a content consumption or gaming device,” said Jitesh Ubrani, Research Analyst for the Worldwide Quarterly Tablet Tracker. “These devices are learning companions, and as tablet prices continue to drop, the dream of having a PC for every child gets replaced with the reality that we can actually provide a tablet for every child.”

According to the IDC forecast, tablet prices will drop further and the iPad mini’s price tag has put a dent on them. But this isn’t the only market trend IDC highlights: they are showing a major shift in tablet screen sizes as well. 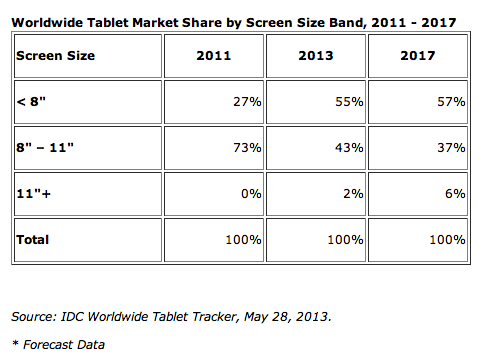 As you can see from the above table, tablets with less than 8-inch screens have gained traction in the market. Apple has finally responded to this trend by releasing the iPad mini last year, and previous market reports have already suggested that the 7.9-inch tablet enjoys tremendous success among consumers.