Think $329 is too much for an iPad Mini? Well, you should checkout the “GooPad Mini” then, that costs only $99 and looks “almost” exactly like the iPad Mini. This Chinese knockoff features an 8-inch display with 1024 x 768 resolution, the same as an iPad mini, and runs a heavily skinned Android 4.1 Jelly bean that looks and feel just like Apple’s iOS 6 (via Micgadget). 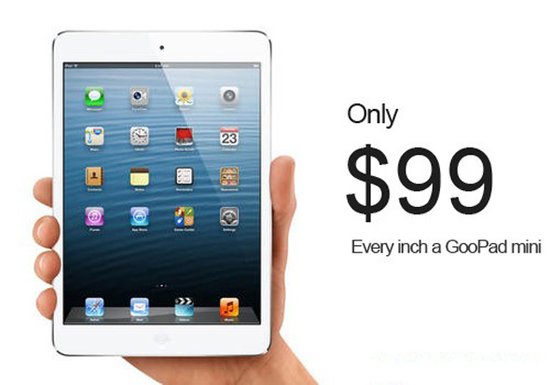 Just like Apple’s iPad Mini, the GooPad Mini will also launch in November.

The device is powered by a 1.4GHz dual-core processor and 8GB of RAM. It won’t come with a 720p-capable 1.2MP front-facing shooter and a 5.0MP rear camera like the iPad mini. The source said the clone will be have an aluminium slim body, but it didn’t mention how thick it is going to be. Also, it’s WiFi only.

Looks like Apple forgot to patent the iPad Mini’s design in China. 😉