Apple has decided to discontinue the iPad 2, the most affordable full-sized iPad available in store, by reintroducing the iPad 4. In a press release issued today, Apple announced the same $399 pricing of the iPad 4 as in the US, and teased with the performance and camera improvements the device provides compared to the iPad 2 it replaces. 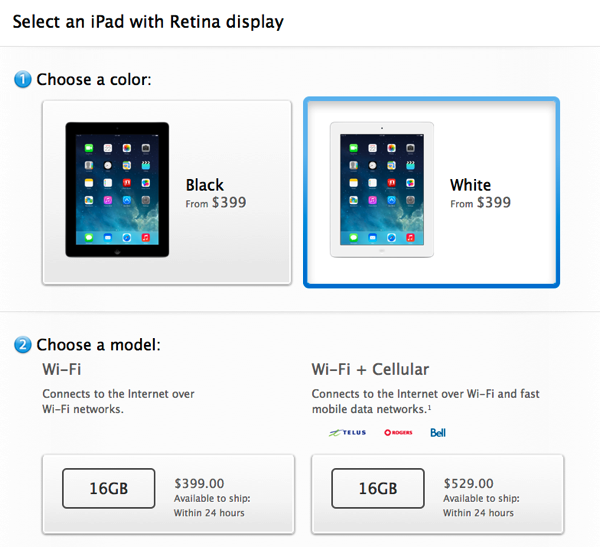 “Now for $399 customers can get iPad with a stunning 9.7-inch Retina display, fast A6X chip, and 5MP iSight camera, offering a dramatic upgrade in power, performance and value compared to the iPad 2 it replaces,” said Philip Schiller, Apple’s senior vice president of Worldwide Marketing. “The iPad line sets the gold-standard in mobile computing and all iPads have access to the largest and best ecosystem of more than 500,000 iPad optimized apps from the App Store.”

The re-released iPad 4 is limited to the 16 GB version only, both black and white, and it costs $399 for the Wi-Fi–only model, while the cellular model available on Telus’, Rogers’ and Bell’s networks costs $529. The devices are available to ship within 24 hours.