A new week and a new leak, this time yet again for the iPad Air 3, which is rumoured to be announced at a March special event. Engadget reports a 3D schematic with dimensions was sent their way from a “reliable source”:

Well, today we received an image that’s allegedly a simple dimensional drawing of the aforementioned tablet. While we’d usually dismiss such leaks, we’re siding with our reliable source on this one. 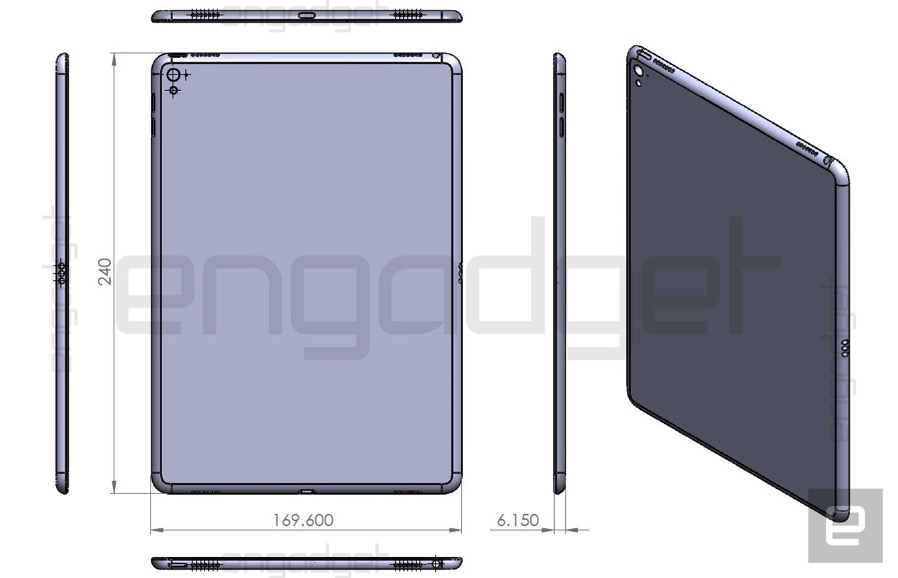 The schematic reveals an iPad Air 3 setup which looks to be a smaller version of the 12.9-inch iPad Pro, has it shows quad speakers, a Smart Connector on the side for accessories (Smart Keyboard, Apple Pencil rumours?), plus what looks to be an LED flash underneath the iSight camera.

The dimensions show the design will be 0.05mm thicker (barely) than the iPad Air 2 and 0.1mm wider, which hints existing iPad Air 2 cases may still fit (similar to how iPhone 6 cases can fit the iPhone 6s).

The drawing looks familiar to a similar iPad Air 3 leak last week, which also revealed the same setup, but this time we get a look at the Smart Connector on the side of the device. On the weekend, we also saw an allegedly leaked iPad Air 3 case, which seemingly corroborates quad speakers, LED flash and a Smart Connector is coming to the next iPad Air.