An iPad fundraiser was allegedly kicked out of Mayflower Mall in Sydney, Nova Scotia, for saying “Merry Christmas.” Janet Parson was raising money for her son’s hockey team with three team members when a mall maintenance worker approached them with a letter and reminded them not to solicit shoppers (via CTVNews). 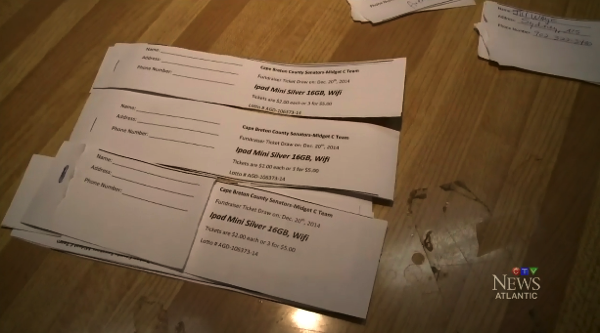 “The last thing that I said was ‘Merry Christmas.’ So I said, ‘Are we allowed to say Merry Christmas to people?’ and he said, ‘No,’ and ripped the letter up and threw it in the garbage,” she told CTV Atlantic.

The 16GB iPad mini — WiFi only, silver, currently $279 in Apple’s online store — was supposed to help the team raise money for the minor hockey team by selling more tickets. Shoppers were invited to buy one ticket for $2 or three tickets for $5.  However, as they were asked to leave, they missed out on sales, she says, so this could hurt the whole team.

“The whole purpose of us donating the iPad is for the team to make money,” she said.

On the other side of the coin, there is the mall’s management. In a video interview aired by CTV Atlantic, the mall’s manager Greg Morrison stands in front of a huge banner with the message “Christmas happens,” denying any wrongdoing. The mall’s policy is to ask fundraisers not to be aggressive when selling tickets, he says.

The mall has initiated its own investigation of the matter. Meanwhile, Parson has filed a complaint with the police.