After analyzing the smartphone market, research firm IDC has published its quarterly analysis of the tablet market as well and found that Apple’s iPad accounts for one-third of all tablet shipments on a global scale.

Looking back at the past quarter, Apple’s “failure” in iPad shipments seems to be even more severe than analysts thought: Its current 32.5% market share compares to last year’s 40.2% recorded for the same period. 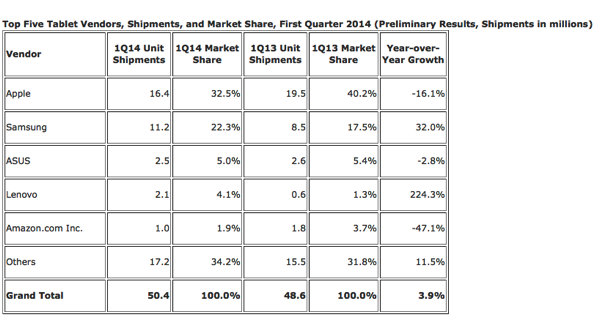 Some of its rivals, on the other hand, like Lenovo, reported a tremendous 224.3% growth year over year. Samsung, its most fierce rival, posted a 32% rise, while Apple’s year-over-year growth was negative: -16.1%, according to IDC’s findings.

When broken down by manufacturers, Apple remained on the top of the list, but since iPad sales dropped, it is losing market share.

Apple maintained its lead in the worldwide tablet plus 2-in-1 market, shipping 16.4 million units. That’s down from 26.0 million units in the previous quarter and well below its total of 19.5 million units in the first quarter of 2013. Despite the contraction, the company saw its share of the market slip only modestly to 32.5%, down from the previous quarter’s share of 33.2%. Samsung once again grew its worldwide share, increasing from 17.2% last quarter to 22.3% this quarter. Samsung continues to work aggressively with carriers to drive tablet shipments through attractively priced smartphone bundles. Rounding out the top five were ASUS (5%), Lenovo (4.1%), and Amazon (1.9%). 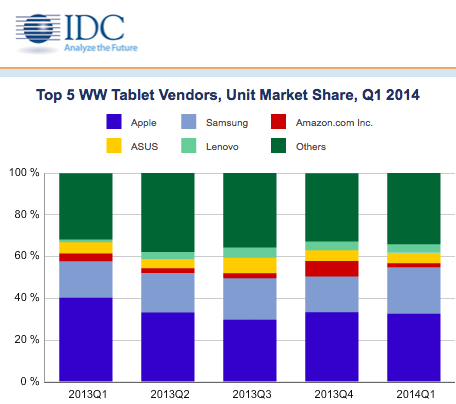 If considering the mobile operating system, Android is the obvious leader, accounting for two-thirds of the global market. The IDC report highlights the growth of Windows tablets thanks to hits like the Asus T100, whose low cost and 2-in-1 form factor helped the platform gain traction.