Global tablet shipments grew to 57.6 million units in the first calendar quarter of 2014, up 19% compared to the same period last year. For Apple, the past quarter was a success in terms of iPhone sales, but analysts are warning of a drop in iPad sales y-o-y: the company sold (only) 16.4 million tablets, securing 28.4% of the global market. This compares to 40.3% recorded in Q1 2013. 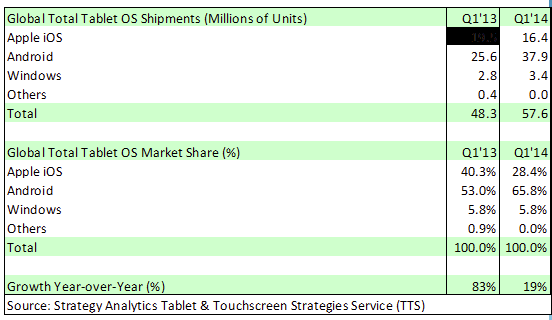 Android tablets, however, recorded a strong quarter, growing to 65.8%, up from 53% reported for the same period last year. Windows tablet sales apparently remained steady, at least according to the numbers published today by Strategy Analytics (via TNW).

“Apple iOS shipments (sell-in) were 16.4 million iPads in Q1 2014 which declined 16 percent annually, but Apple claimed that due to channel inventory changes which were reduced significantly from the same period last year, sell-through only declined 3 percent. We believe that the disappointing performance in the early part of the calendar year is because Apple has changed its product release cycle to the holiday timeframe. iOS will likely lose share over the next several months to refreshed Android products, but we believe Apple will win back meaningful high-end market share during the final months of the calendar year,” said Peter King, Director of Tablets at Strategy Analytics.

While any of the exiting Android tablet makers would be happy to have Apple’s quarterly sales numbers, the 3% drop is a bad sign, analysts believe, while Apple says it has met its internal estimates and attributes the drop to changes in its product release cycle.