TBWA Media Arts Lab has been awarded the Grand Prix in press for its iPad Mini campaign, AdvertisingAge is reporting. The advertising company won the award for highlighting the beauty of magazines seen on iPad Mini, by featuring five print ads, each with a different magazine’s cover at the left, and the same cover within an iPad Mini at the right with a small Apple logo. 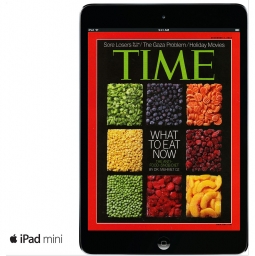 There were originally six Grand Prix contenders, with India, Dubai and Argentina all in the running for the top prize. The winning firm used covers from real issues of Time, Surfer, Wired, the New Yorker and Wallpaper. Marcello Serpa from the jury, who has been a judge twice before, said “Print is a magical medium, inside a frame”. If an idea is there, it pops up. “There’s no case video, no music”, he added.

Why it won: “It has a kind of guerrilla feeling,” Mr. Serpa said. “It’s a product that goes inside the media and says I’m going to kill you, [then] I’m going to save you. Let’s embrace. It’s redemption.”

Controversy or clear winner: Picking the Grand Prix was a long, long process with many votes and endless discussion, especially when it got down to the final three: iPad, the much-awarded Ogilvy Brazil “Sketches” campaign for Dove, and a dark horse contender from China for Beijing Sports Radio that shows fans at sports events with their eyes closed, because they are listening to the radio.

The article notes that at one point, the vote was almost deadlocked between iPad with 10 votes and Dove at 8, with judges changing their votes as they listened to each other’s arguments, but Apple prevailed.