iPad mini With LTE: No Estimated Date of Delivery For Canada

The iPad mini may arrive a little later than expected. According to a report from 9to5Mac, those who ordered the LTE iPad minis in the US will receive theirs around November 23. 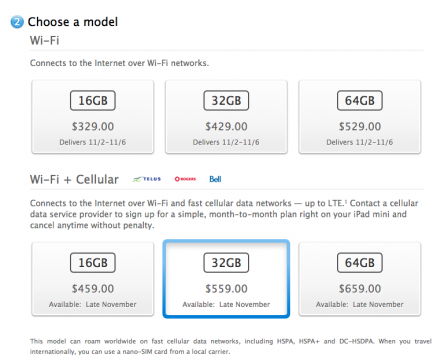 While US users ordering the cellular version of the iPad mini have already been given a delivery date, there is still no estimated shipping date for the iPad mini for Canadian users, who are only getting “late November” as a message for their orders.

The iPad mini Smart Cover, however, is available for shipping within 3–5 business days, but what can you do with a Smart Cover without the eagerly awaited device?

Apple introduced the iPad mini on October 23 along with the fourth-generation iPad, the world’s thinnest notebook, the 13-inch Retina MacBook Pro, refreshed iMac and Mac Mini. At that time Phil Schiller said the cellular version of the iPad mini would ship a couple weeks after the Wi-Fi version, which will hit the stores on November 2.

We, however, hoped that the device would be available at least around the middle of next month, but that’s all we have: hope.

Canadians are familiar with waiting for the latest tech, but we were wondering what “Late November” means from Apple’s point of view. Did you get an estimated date of delivery when you ordered the Wi-Fi + Cellular iPad mini?