Apple’s iPad is still the most loved tablet of all, according to the latest J.D. Power US Tablet Satisfaction Study, but the Microsoft Surface is just one point away thanks to its features, styling, and design factors.

J.D. Power’s annual study measures customer satisfaction by taking into consideration five factors: performance (28%), ease of operation (22%), features (22%), styling and design (17%), and cost (11%). The iPad topped the list once again with 830 points, followed by the Surface with 829 points and Samsung with 822 points.

What the market research firm has found this year is that tablet device satisfaction is up, compared to the latest study released six months ago, and that customers seem to love hybrids: there is a rising demand for hybrid tablets. It is also worth noting that US customers paid $444 on average for a hybrid tablet compared to $277 for non-hybrids.

Apple customers continue to be loyal to their beloved brand: J.D. Power analysts note that among customers whose previous tablet was an iPad, 80% acquired another Apple tablet for their current device. The second-highest repurchase rate is for Samsung tablets at 57%, according to the firm.

The 2016 US Tablet Satisfaction Study Volume 1 results are based on experiences evaluated from 3,485 tablet owners who had owned their device for less than a year, and was fielded between September last year and February 2016. 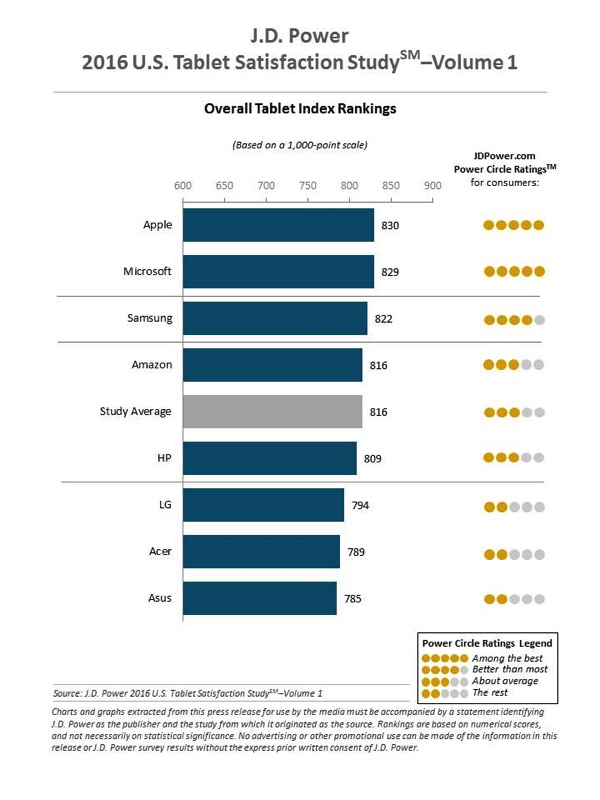