The iPad 4 and iPad mini screens beat their competitors in terms of screen responsiveness, cloud streaming company Agawi has found, after testing the majority of leading tablets, including the Microsoft Surface and the new Kindle Fire HD.

Agawi introduced its TouchMarks reports earlier last month when they benchmarked the iPhone and the majority of smartphones from different manufacturers to find out which had the most responsive touchscreen.

To find out, they used their Touchscope, which tests screen latencies by measuring the App Responsive Time of touchscreen devices. This is the time between the user touching the screen and the device updating the display. Back then, they found that the iPhone 4 has a more responsive touchscreen than the Samsung Galaxy S4. 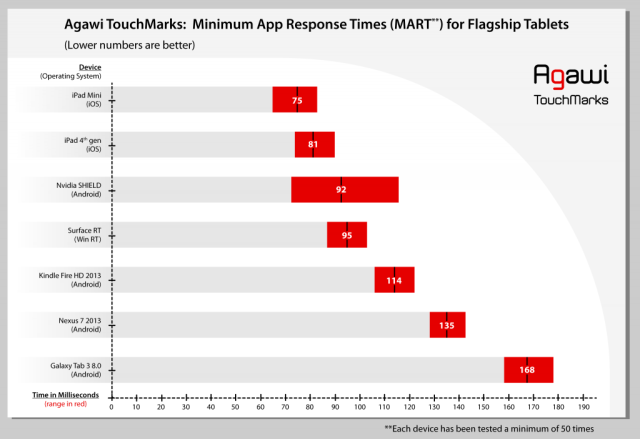 The picture doesn’t seem to have changed much in the tablet market either: the iPad and iPad mini have outperformed their rivals. What’s more interesting, though, is the ranking of non-iOS tablets.

In a result that’s perhaps now unsurprising, the iOS devices are more responsive than its competitors. Interestingly, the iPad mini – with its smaller screen and 1024×768 resolution – performs similarly to the larger fourth generation iPad and its 2048×1536 resolution, suggesting that responsiveness is not reduced by the larger screen size or resolution.

Amazon’s Kindle Fire HD was a surprising leader in the Android section, especially given that it’s $90+ cheaper than the other two Android tablets. This could be a result of Amazon’s willingness to sell expensive hardware at a loss. Finally, Microsoft’s Surface RT also performed much better than we expected, especially given that Nokia’s Lumia also running Windows didn’t fare significantly better than Android devices in our smartphone comparison. Given these results, I’m especially excited to run Amazon’s higher-end Kindle HDX and Microsoft’s new Surface 2 through our Touchscope. I’ll be updating this post with the results as soon as I can get my hands on them.

In the end, what matters is the experience: you can choose any of the tablets available on the market, but if you are after the best customer experience, including the touch responsiveness of the screen (especially important in gaming), then your choice should be the iPad, the Agawi report concluded.