Paul McCartney has joined the growing list of musicians exploring new, interactive, format for albums by releasing them as apps. The musician has today announced that five of its classic albums are being released as iPad apps-Band on The Run, McCartney, McCartney II, RAM and Wings over America (via The Guardian). 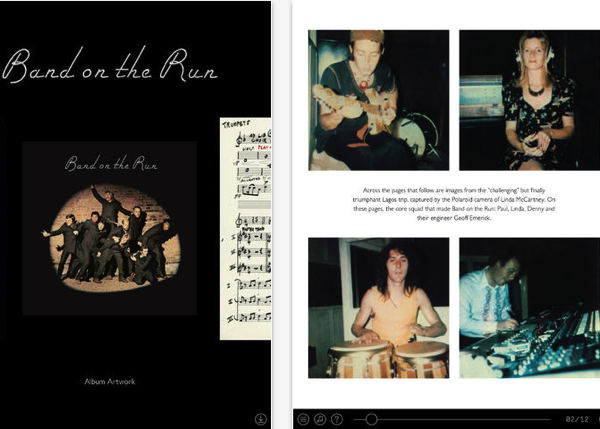 Each of the five applications costs $7.49, less than the price paid for the same album in the iTunes store, where they sell for between $9.99 and $12.99. The iPad app’s price makes them more attractive for music fans, especially given that the apps contain lots of additional data, such as remastered audio tracks, interviews, rare photos, single artwork, and videos including those capturing rehearsals and documentaries.

The first artist to adopt apps as a new format for promoting albums was Björk with her Biophilia application back in 2011. The application turned the album into mini-games, interactive art and music creation tools.

Lady Gaga made a similar move in November 2013, by releasing a companion app for her ARTPOP album.

As an industry analyst interviewed by the Guardian observes, the spending trend in the iTunes store points to apps, rather than music. Unsurprisingly, in 2003, music accounted for 100% of the Apple’s iTunes store revenue. Ten years later, this dropped to 38%, as apps now accounted for 62% of iTunes store spending.