Following the Retina iPad Mini’s launch this morning, the very first Geekbench 3 benchmarks have already hit the web and it seems that the new device features a 1.29Ghz processor, performing at pretty much the same speed as the iPhone 5S which runs at 1.30GHz (via @jfpoole). With a Geekbench score of 2512, the Retina iPad Mini is  running approximately 5X faster than the original iPad Mini which scored somewhere around 493. 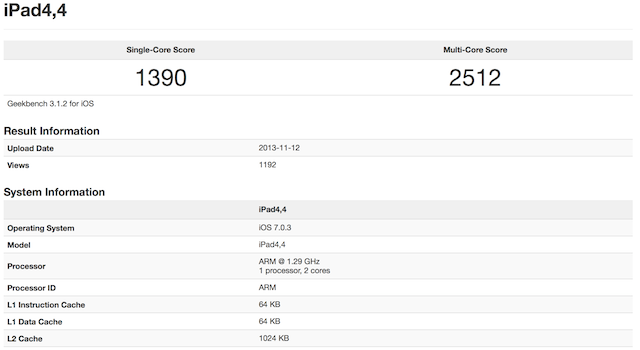 While the iPad Air also packs the same 64-bit A7 SoC used in the Retina iPad Mini and the iPhone 5S, its processor clocks in slightly higher at 1.39 GHz. During actual usage however, it is unlikely that consumers will notice these minor speed differences.

As to why Apple chose to clock the Retina iPad Mini at 1.29Ghz instead of 1.39Ghz like the iPad Air, it is believed that the lower clock speed in iPad Mini may improve overall battery life, and also reduce the heat within the smaller form factor.