This year, with the introduction of the Retina iPad mini set for a launch in “November”, the new higher resolution tablet will ship with a new 10w iPhone USB power adapter, as shown in the “What’s in the Box” page: 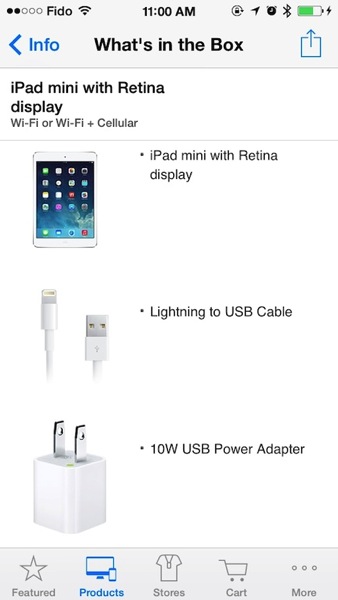 This new 10w power adapter is not available for purchase on Apple’s online store in either Canada or the USA. Only the 5w and 12w adapters are available for $21 each.

The higher powered 10w USB power adapter should allow the Retina iPad mini to charge much faster than before. Assuming Apple was able to bump up the battery’s capacity to power the high powered Retina display, the need for faster charging is definitely relevant in this case. We’ll find out soon enough once Retina iPad mini teardowns happen in November after launch.