Analyst firm DisplaySearch has published its latest data on Monthly TFT LCD Shipments, indicating that tablet panel shipments shifted dramatically towards smaller screen sizes during January, fuelling expectations that 2013 could be the year of smaller tablets such as the iPad mini. The report suggests that 7-9” tablets would become a larger part of the market than 9.7” or 10.1” tablets during the year. 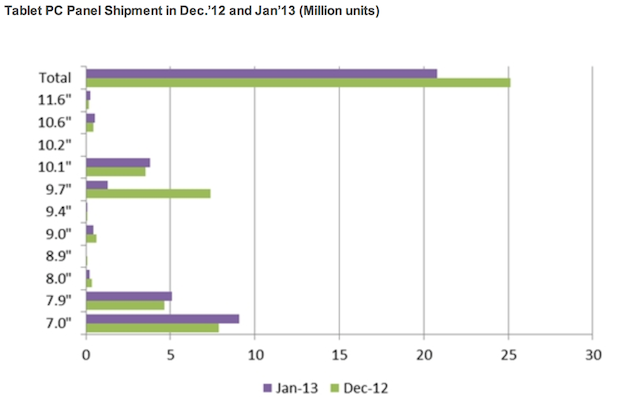 While Apple was previously expected to sell 40M iPad minis and 60M iPads in 2013, it now seems that the ratio may be reversed as the iPad mini has grown to become more popular than its larger sibling. The study highlights that in general, shipments for 9.7” tablet panels fell from 7.4 to 1.3M, while 7”and 7.9” tablet panel shipments grew from 12 to 14M.

We now understand that Apple may be planning to sell 55M iPad minis (7.9”) and 33M iPads (9.7”) in 2013. At the same time, Samsung, Amazon, Google, ASUS and Acer are all eyeing the 7-9” segment to grab tablet PC market share, while many white box makers in China are also emphasizing the smaller size tablet PC.

Shipments of 9.7”tablet PC panels collapsed, falling from 7.4 to 1.3M, while 7”and 7.9”panel shipments grew rapidly, from 12 to 14M. Shipments of 10.1”panels grew only slightly. The January panel shipment data may be an indicator for 2013, starting with Apple’s product mix shift.