This morning Apple brought back the iPad 4 from the dead to replace the iPad 2, starting at the same price of $399.

For those looking to jump on a 16GB Retina iPad mini, Staples will have a $40 off sale on Wi-Fi models starting tomorrow until March 25, as advertised in their upcoming flyer: 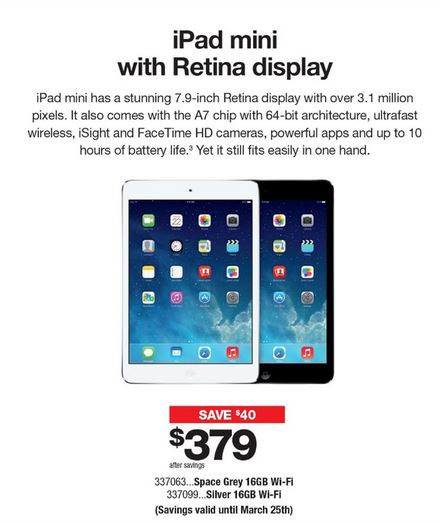 It’s a decent discount and you could probably price match at Best Buy or Future Shop to take the price down further (10% of the difference, which is $4). The Retina iPad mini launched last November and has the latest A7 processor along with FaceTime HD cameras and faster wireless.

Earlier we told you about Staples’ one-day sale on the original iPad mini. But this sale on the Retina iPad mini looks to be a much better offer. Let us know if you’re going to jump on this.