If you’re looking to purchase the original iPad mini, Walmart.ca just kicked off a sale today on the 16GB Wi-Fi model.

The rollback brings a savings of $30 to bring the price down to $288, which includes free shipping online (it’s also available in stores). The sale applies to both black and white models. 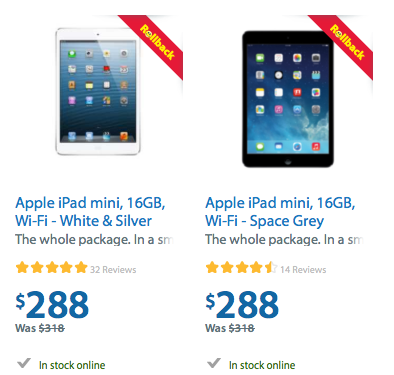 If you are a savvy shopper, you could save a bit more (about $3; 10% of the difference) by price-matching this Walmart sale at either Future Shop or Best Buy.

Apple’s education discount sells this model for $299 ($20 off) and students also get a $55 gift card with iPad purchases with the ongoing back to school promo. So if you buy from Apple it’s a ‘better’ deal, but your savings will be in the form of a gift card towards a future purchase. But if you want to save today, pricematching might be the way to go.