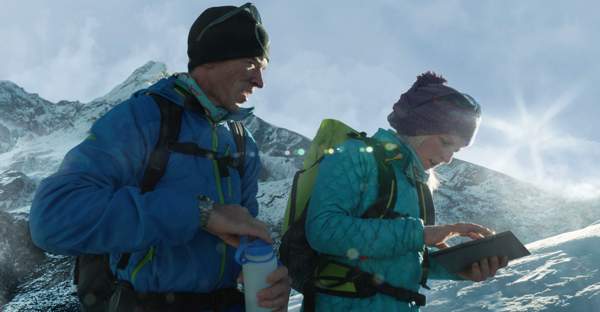 Apple has added another “verse” to the “Your Verse” campaign: after checking moves on the ice, on-the-fly filmmaking, capturing a vision in Bollywood, exploring the depths of the ocean (and other stories), the company is taking visitors to the mountains.
Apple is showcasing the use of the iPad Air in the hands of mountaineers Emily Harrington and Adrian Ballinger, who have climbed some of the highest peaks in the world. They use the iPad Air and the Gaia GPS application to help them plan routes, summit safely, and detail and share their adventures with the world.

Base camp is also where Ballinger and Harrington use their iPad to start blogging, posting photos, and making updates on social media. In the past, recounting their story would have had to wait weeks until they returned to civilization, but now they can edit and upload photos and videos right from camp on the iPad.

At each stage of the climb, Ballinger and Harrington reduce the gear in their packs. So as the climb becomes more difficult, they’re carrying only the most essential tools. And because it’s a crucial part of how they navigate the mountain safely, the iPad makes it all the way to the top.

The Life on iPad ad campaign kicked off last year and aims to show the different uses of Apple’s tablet. Since then, Apple has created a separate Your Verse page showcasing how people use iPads every day.