Apple is looking to get into the business of unique device identification, Patently Apple reports, filing a patent that details plans for a “digital handshake” capable of transferring data between nearby devices. The patent application, published by the US Patent & Trademark Office today, preposes using a camera that could identify barcodes or invisible ink that would allow devices to recognize each other. 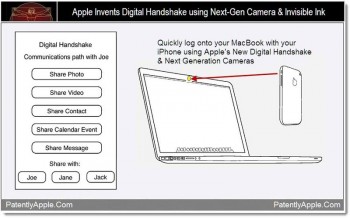 The devices could share the keys using any suitable approach, including for example providing the keys in a manner that an image captured by each device could include the other device’s key. For example, each device can display a seed to be identified from an image taken by the other device. Using the extracted keys or seeds, each device can generate, using a same process, an identical digital handshake key. The digital handshake key can then be used to define a secure communications path between the two devices and share information securely.

While technology that can transfer data between devices quickly and securely such as Bump and PayPal already exists, Apple’s preposed plan would create a simpler and more robust transfer method.

The patent application was filed in May 2010 and is credited to Apple UI designers Marcel Van Os and Caroline Cranfill.