You’ve been hearing stories about this over the past couple of weeks–iPhones have been unavailble for purchase due to low supplies worldwide (EG – London, NYC, etc). We know that Rogers has announced the iPhone is coming to Canada, but there were no details given. However, some new evidence has come up just recently though.

Oh No! The Apple Store Says iPhones are Unavailable!

The Apple Store online won’t even let you purchase iPhones online! That’s right folks, iPhones are shown as “Unavailable” on Apple’s website. This is a pretty good sign that the 3G iPhone is on its way. As for the release date, a good announcement date would most likely be at the Apple WWDC happening on June 9th, as most rumors have been mentioning.

Another piece of evidence that supports an imminent 3G iPhone release is located within the current beta version 5 of iPhone firmware 2.0 (list of features here). A new screenshot has appeared on the web that indicates an option to “Enable 3G” as “Using 3G loads data faster, but decreases battery life.” Pretty interesting stuff I must say, but like I’ve always mentioned before we’re going to have to continue counting down the days till the June 9th WDC.Until then, happy waiting! 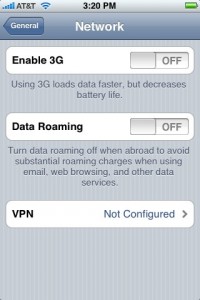