In a new report from iDB, a source deep inside Apple has said that iOS 6 will not have any major UI changes or new features, but all the core apps will be rebuilt from the ground up. 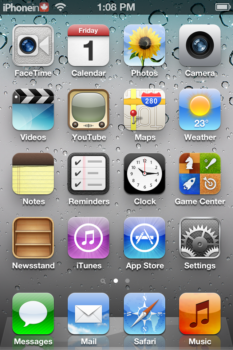 We had already heard that iOS 6 will abandon Google Maps, in favour of Apple’s own in-house solution, so these new claims that other apps will be rebuilt is not much of a surprise. Rebuilding the core apps of iOS could support recent rumours that the next iPhone will have a new, taller display. The new resolution would mean these core apps would need to be updated to fit the new screen size, anyway.

iDB’s source noted that, at first glance, you won’t really know it’s iOS 6, as the home screen is exactly the same, at this stage of development. Upon launching the core apps, you will notice a new silver colour to the UI. Launching the apps is where we will really notice the difference, as they have been completely rebuilt, and bring some surprising new features.

iDB’s source commented on the recent rumours of the Maps app. iDB asked the source if turn-by-turn navigation was coming, but the source just had this to say: “Maps is completely leaked out. Nothing more to add“. The source also confirmed recent rumours that the Camera and Photos apps will receive major updates.

In general, the source seemed to give the impression that iOS 6 will be worth the update, and should bring just as many new features as iOS 5 did. The source noted that iPad 3 owners will especially want this update. This could mean that iPad 3’s higher RAM and processor might better handle these new updates. The source did not comment on if older devices, like the iPhone 3GS would be dropped, after iOS 6. The original iPhone and the iPhone 3G, were not supported after similar updates.

We’re just 6 days away from this year’s WWDC, where it is expected that Apple will give us a preview of iOS 6, with the possibility of a developer’s preview release shortly after. We’ll be paying close attention, and bring all the details as we receive them.