iOS developer Kim Streich has just pushed an update to his famous 3G Unrestrictor tweak. Its called 3G Unrestrictor 5 and as the name suggests, it has been fully optimized for iOS 5 and will also work on iPhone 4S & iPad 2 devices (once the A5 untethered iOS 5.0.1 jailbreak is made public). The tweak has been completely re-written from ground up and provides users a complete freedom of running apps over their regular data connection by convincing WiFi restricted apps that they are operating on a wireless network when it is actually a 3G, EDGE /GPRS connection. 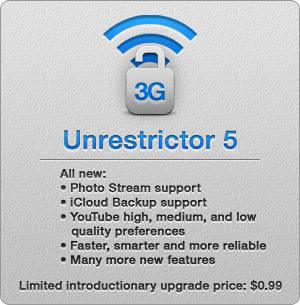 Owners of the original 3G Unrestrictor can upgrade to the version 5 for a limited time for a price of $0.99, while new users can buy it for $3.99 from the Cydia store. Here is what you can do with 3G Unrestrictor 5: