Blocking the ads in your browser can help speed up your browsing experience, as pages will often load much faster. If you jailbreak your iPhone, you can get a tweak called “AdBlocker”, that will help speed up mobile Safari, as well as other UIWebView based browsers and apps. It usually goes for $2.19, but is now free for a limited time. 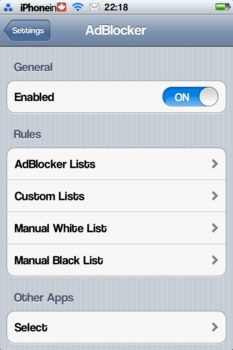 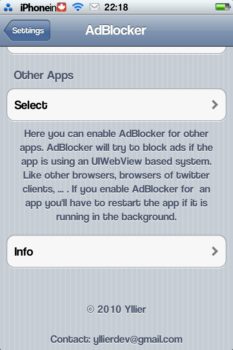 For Safari and other Apps with web browser functionality!

AdBlocker is an easy to use and powerful tool, similar to extensions for your desktop browser. It blocks ads in Safari and other apps which are using browser-like views (UIWebView). If an app is using UIWebViews to display content (other browsers like Skyfire, browser in a twitter client,…) AdBlocker will block ads from being loaded and tries to optimize the space.

AdBlocker is designed to block image based ads in webcontent like websites and not advertisement in ad-supported apps.

AdBlock will reduce your data usage and often speed up loading of pages by blocking image based ads; extremely useful if you have a limited cellular data plan – it will save you money!

BlockLists are being downloaded from the net. No need to create huge configurationsfiles yourself.

AdBlocker is very fast, regex-based tool and can handle lists with thousands of entries without noticable slowing down the apps. Lists for 17 languages are build in, but you can easily add custom lists. Just google ‘adblock lists’ to find urls.

This is a true AdBlock equivalent to extension for desktop browsers, it uses huge lists that can single out specific parts of a domain, or only folders from a domain or even just a single image and therefor is superior to adblocking methods based only on hostnames.

Check Preferences.app for Settings and features.

AdBlocker is designed to block image based ads in webcontent like websites and not advertisement in ad-supported apps.