Add Speech to Your Notifications with SpeakEvents [Cydia Tweak]

With iOS 5 came the Notification Center. It was a vast improvement over the way iOS used to handle notifications, but there is always room for improvements. In cases where we are not getting what we want from Apple, we look to the jailbreak community and Cydia. 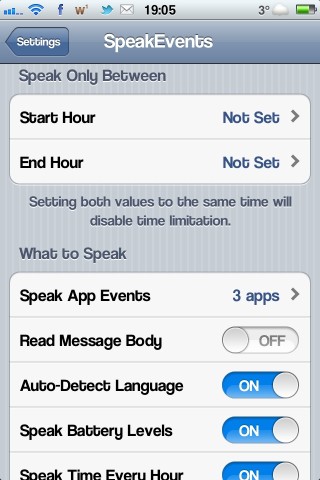 A tweak has recently been released called “SpeakEvents”, that allows your iPhone to automatically read incoming notifications to you. It will also read your emails and text messages. It uses the native “Siri” voice. You can set it to work with any app on your device, and set it to only work at certain times of day. It works with iPhone, iPod Touch, and iPad and requires iOS 5 and up. It supports multiple languages.

Here’s a video from iDownloadBlog showing how it works:

SpeakEvents is available in Cydia now in the BigBoss repo, for $1.99. You don’t pay for it in the traditional way. You have to purchase the license in the Settings app.