Ever since the release of JailbreakMe.com, people around the world have been jailbreaking their iPhones with ease (and even those inside Apple Stores). More important, this new jailbreak made it possible for everyone to easily unlock their iPhones with ultrasn0w.

Since August 5th, the iPhone Dev Team reports that 784974 ultrasn0w 1.0-1 unlocks as of August 4th in 218 unique ISO regions. Surely that number has surpassed the 800,000 mark. This is an incredible number and shows the sheer importance of how many people rely on these guys to unlock their iPhones. Well done Dev Team!

Canada Ranks #2 Worldwide with over 70,000 Unlocks

The US has over 217,000 unlocks. Canada comes secondÂ in 9th with over 23,000 unlocks. However if you take our population into consideration, Canada has a higher rate of unlocks. The USA has roughly 10 times the population of Canada. That would put us at roughly 235,000 unlocks! 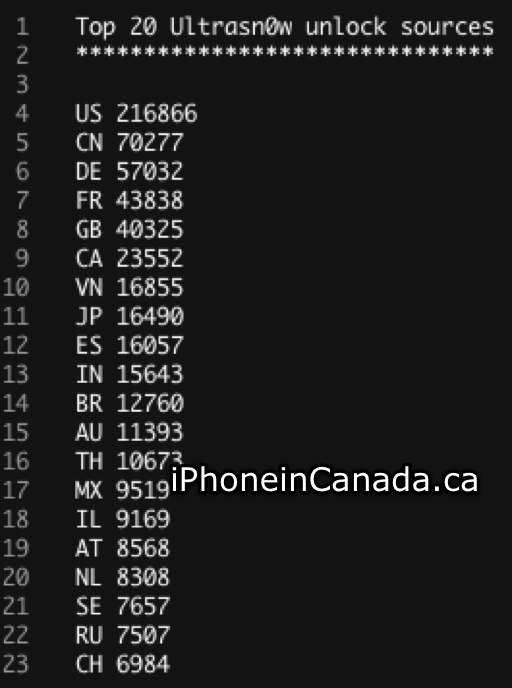 The problem is, that once Apple releases a new iOS update, that will null your jailbreak and your unlock. Once again, you’ll have to play the waiting game to safely update and unlock your iPhone. People have been doing this ‘cat and mouse’ game for the past 3 years now. But with Apple now selling factory unlocked units, many can now update in iTunes and keep their factory unlock.