Some very interesting news has been confirmed for those people who have ordered the new Apple TV. It has been confirmed that Apple TV does indeed run iOS 4.1 (and support Netflix Canada!). How? iPhone developer chpwn posted a link to download the firmware from Apple!

This firmware isn’t useful for anyone yet, but turns out this little tidbit of information has already proved useful, as the iPhone Dev Team has decrypted the Apple TV firmware keys.

As per an update on their SHAtter blog post:

UPDATE #1: Itâ€™s looking like SHAtter is going to be the gift that keeps on giving. Â Even though the new AppleTV isnâ€™t yet in peopleâ€™s homes, the firmware is available on Appleâ€™s normal public distribution servers and SHAtter has been used to decrypt its keys! Â The main filesystem (â€œMojave8M89.K66OSâ€) key for 018-8609-066.dmg is:

If youâ€™re familiar with vfdecrypt, you can use that key to decrypt the image and mount it. Â If you do so, feel free to use the comments section to discuss what you discover there 🙂 Â (And of course, thanks @pod2g!) 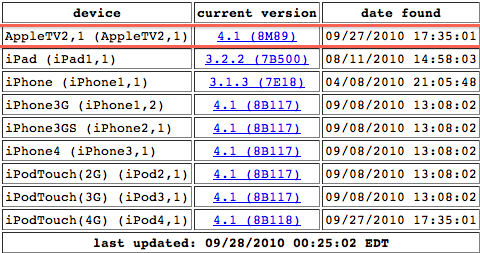 If you’re interested in a possible jailbreak for the new Apple TV, let’s hope you’ve already ordered, or you can get your hands on one early. This is some very interesting news and opens up some new possibilities for Apple TV.

Update 1: The following tidbits have been discovered by MacTalk member Matthew858