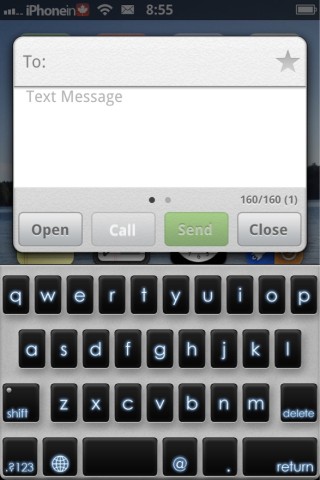 Modifying the iOS experience has become quite popular, with over a million iOS users jailbreaking their devices. One of the most popular apps in Cydia is a messaging app called “biteSMS”. This can replace your default Messages app, adding much more functionality. The ability to “quick reply” to messages makes this a must have, for me.

The biteSMS team likes to test their beta releases publicly and If you install the biteSMS beta repository, you’ll get the updates as soon as they are ready. Today they have released biteSMS 6.3 beta 10. This new version brings some new theme options and fixes some bugs and crashes of previous versions.

When biteSMS 6.3 is out of beta, it will have many new theme options, but you’ll need to have some iOS theme skills, to take advantage of this new feature. Of course we will most likely see many new themes for biteSMS pop up in Cydia (there are already a few), but if you want to make it your own, you will need some Photoshop knowledge and some iOS file hierarchy knowledge. biteSMS has detailed what you need to do to install you themes, here. You can also visit their forums, for the lastest news on beta releases.

If you want to try out this latest beta of biteSMS, add their beta repository to Cydia, on your device: http://cydia.bitesms.com