Just a short tidbit for all you iPhone unlockers out there. Earlier this week, revered iPhone hacker, Geohot (maker of the blackra1n jailbreak utility) announced on twitter that he was going to start searching for an exploit for the 05.11.07 baseband (the current iPhone baseband firmware; use PwnageTool 3.1.4 to preserve your baseband!).

blacksn0w: The Future Exploit for the 05.11.07 Baseband is On the Horizon

Early in the morning, Geohot updated his blog with a post titled “Heap of Trouble”, along with the following screenshot, which had this to say:

hello there, this is geohot
this is the most complicated injection i have ever done, and it uses a public command
… prepare for blacksn0w, although i gotta still figure out this zamboni 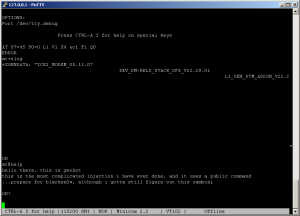 I’m always amazed at how incredibly talented these iPhone hackers are, especially Geohot, the one man show. Stay tuned for more info as Geohot continues his quest to unlock the 05.11.07 iPhone baseband.