On the Hack In The Box Security Conference’s official Twitter feed, it has been announced that The Chronic Dev Team will debut their new jailbreak, live! This was rumoured to be happening, just last week, and now the rumour has been confirmed. 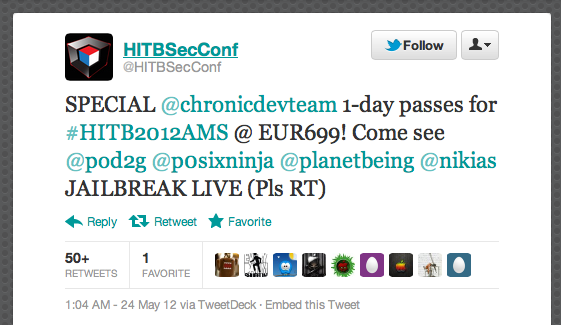 Hackers pod2g, p0sixninja, planetbeing, and nikias will be on hand tomorrow, at the HITB SecConf demo their latest jailbreak, showing off their months and months of hard work. HITB has a special deal on one day passes, if you happen to be in Amsterdam and want to attend.

This is not a release date announcement. This just means that they are comfortable enough with the new jailbreak tool, to demonstrate it live, for the crowds at HITB. It is possible that we may get a release announcement tomorrow, but that is just speculation. The Chronic Dev Team’s talk is scheduled to start at 5:30am (PST), on Friday, May 25th. We’ll just have to wait and see, if they will be actually releasing the jailbreak, or just giving a demonstration.