Clippy: Copy and Paste for the iPhone

Yesterday a new 3rd party application was released in Cydia from iSpazio. The app is called Clippy and after some initial testing it’s one of the best temporary working copy and paste solutions for the iPhone.

How to Install Clippy (Copy and Paste) On your iPhone

1. Your iPhone must be jailbroken. Read up and follow my guide here for jailbreaking with QuickPwn.

2. Go to Cydia, search for Clippy and install it.

After that, the copy and paste will be available only in apps that use the keyboard. For example, in Mail, Safari, Notes, etc. All you have to do is tap the “123” key. Take a look at the following screenshots from my experience in testing out Clippy in Notes: 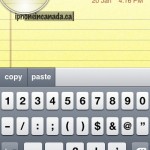 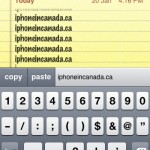 Clippy actually works pretty well for copy and paste, but of course there are limitations such as only being able to use it when the keyboard is present. If you need copy and paste for your iPhone desperately I would get Clippy in a heartbeat!