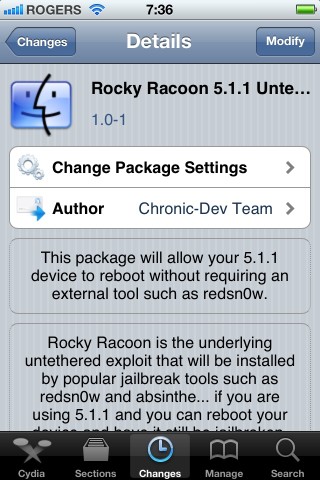 Today marks the release of the much anticipated untethered jailbreak for iOS 5.1.1. Absinthe 2.0 was released earlier this morning, finally bringing the new iPad into the jailbreak family.

If you have an older device, and have been using a tethered jailbreak for iOS 5.1.1, there is no need to restore and re-jailbreak with Absinthe 2.0. You can simply apply the untether, right from Cydia, with “Rocky Racoon”.

To use this untether, you must already be jailbroken, tethered, with the latest version of Redsn0w. Open Cydia and do a search for Rocky Racoon 5.1.1 Untether. Install and reboot. That’s it! You’re device should be untethered now. Make sure you keep Rocky Racoon installed on your device, as it is required to make the untether work.

If you like, you can restore and use the brand new Absinthe 2.0, as It supports almost all devices that runs iOS 5.1.1. Rocky Racoon offers a much quicker and easier way to untether your already tethered jailbreak.